It’s always been said that “God can’t be present everywhere, and that’s why he made Mothers”. Mother’s love is often been regarded as the purest and unselfish one amongst all others and that’s what we can also say about the connection between Shabnam singh and her Star cricketer Son Yuvraj Singh.

In the wake of recent reports of her ex Daughter in law Akansha singh’s allegations toward the family for so called “Harassment” and “Domestic Violence”, we shall take a look into how things actually were within the family before the dirt has been thrown on their happy world by their once “Beloved Family member”. 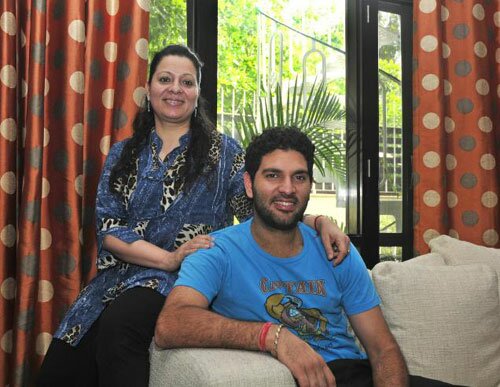 Yuvraj has always been close to his mother just like every child but it was his worst days when he was fighting with cancer, that brought the real strength of their connection forward. It was when he left the field and the whole world was praying for him, his mother was the strength to make a comeback. Most of the cricket analysts though doubt  Yuvraj whether he would be able to play with the same agility and the power,but it was his Mother’s Inspiration which led him to return nice and high fighting all the odds. Moreover, it was his mother Shabnam singh who stood by his son’s choice of marrying a British model turned actor Hazel keech in spite of people calling her “Not fit to be Yuvi’s Bride”. Even after marriage, Hazel and Shabnam singh are still enjoying a great chemistry in that “Saas-Bahu” relationship.

So it’s a given that whilst Yuvi’s mother has been a true support to him and his beliefs even till now, there are still few people who are doubting her “Motherhood”. We can say that such people have never loved anyone or they maybe don’t know the meaning of true and selfless love. They will still keep spilling dirt in spite of their own character in question.

Do you love to take selfie pics usually or with friends in any party or occasions? I think everyone of us who have smartphone…