Durga Puja is celebrated for the victory of Mother Goddess Durga, the warrior who won over Mahishasura, the evil buffalo demon. The festival is celebrated to honor “Shakti”, the strongest female force in the Universe.

The date when the festival is observed is determined as per the lunar calendar. It is celebrated during the last 5 days of Dussehra and Navratri. Durga Puja will be celebrated from October 15 to 19, after the grand immersion of idols on 19th October, 2018. 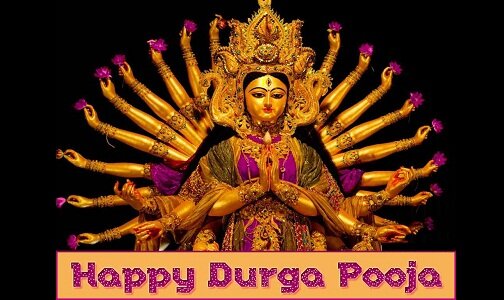 Where is Durga Puja Celebrated?

Durga Puja is celebrated in the city of Kolkata, in West Bengal. It is the most significant and biggest occasion of the year. In several locations in India, Bengali communities celebrate the festival. Major Durga Puja festivities are observed in both Delhi and Mumbai. Head to Chittaranjan in Delhi (also known as mini Kolkata in Delhi), Minto Road, and the oldest traditional Durga Puja in Delhi is held on Alipur Road, Kashmiri Gate. Some of the most appealing pandals you should see at Chittaranjan Park are B Block, Kali Bari (Kali Mandir) and near Market 2. Delhi government is offering free shuttle service to the pandals in 2016 at Chittaranjan Park. It departs from the selected parking area every 20 minutes in Nehru Place. The Bengali Club in Mumbai holds a huge traditional Durga Puja at Dadar’s Shivaji Park that is taking place since 1950s. The glamorous Durga Puja pandal is stitched at Lokhandwala Garden located at Andheri West which is attended by several celebrity guests. Never miss the North Bombay Durga Pooja for an exclusive Bollywood-themed extravaganza. The Ramakrishna Mission has Kumari Puja in Khar where young girls are dressed and worshipped on Ashtami as Goddess Durga. The festival is popular in Tripura and Assam, in Odisha and North East India.

Durga Puja is celebrated in the same way as the Ganesh Chaturthi festival. At the beginning of the festival, well-crafted and huge statues of Goddess Durga are installed at homes along with the well designed podiums across the city. At the end, statues are paraded along the streets accompanied by dancing and music, and immersed in water.

The occasion of Mahalava is observed over 1 week in advance before the festival, were Goddess Durga is invited to the earth. On this day, the artisans draw the eyes on the idols in a holy ritual, known as Chokkhu Daan. After installing the idols of Goddess Durga, a ritual is performed to call up the holy presence of her on Saptami. It is known as Pran Pratistha. This way, a banana bride (Kola Bou), small banana plant is bathed in the nearest water, dressed in sari and is used to move the energy of the Goddess. Prayers are offered every day to the Goddess during the festival and devotees worship her in different forms. She is worshiped as a virgin girl known as “Kumari Puja” on Ashtami.